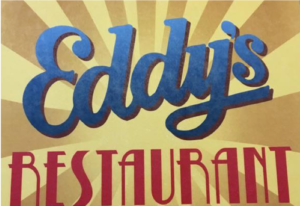 Eddy’s Restaurant, April’s Client of the Month, is a family owned and operated restaurant located at 742 Broadway in Kingston. The establishment is run by Christakis (Chris) Millouras, who opened the restaurant in 1971 with his father-in-law, Eddy. Chris immigrated to the U.S from Cyprus, Greece in the 1960s as a merchant marine. He worked on Greek sailing vessels, eventually landing in Kingston where he met his wife Joanne (who was also born in Cyprus, but raised in Kingston). Together the two, alongside Eddy, ran the restaurant while raising three children.

Eddy’s serves both breakfast and lunch, and is known for their turkey. (In fact, some locals even refer to the restaurant as the “turkey palace!”) Chris roasts an entire turkey daily, carving the meat right in front of customers for fresh turkey sandwiches and more. Eddy’s is also known for their eggs, which are cooked up fresh and in front of customers on their antique flat top, served with a selection of bacon, sausage, or ham, and their famous home fries. 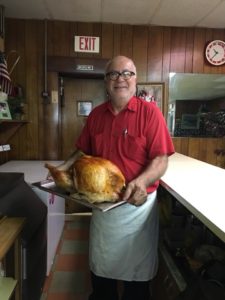 The restaurant is open Tuesday through Friday from 6am – 3pm; Saturday from 6am – 2pm; and Sunday from 6am – 1pm—although most mornings, you can be seated as early as 5am when Chris opens the doors!

Eddy’s has been insured by Ryan & Ryan Insurance Brokers for more than 25+ years. When asked why they chose R&R as their insurance agency, Chris responded by stating that he has a long and loving relationship with Bob Ryan. They have been good friends for years, and have a deep mutual respect for one another.

When long-standing Eddy’s employee Michele Shannon was asked about working at the restaurant, she responded by staying, “All of us who work at Eddy’s are family. Chris may not be my biological father, but he is my adopted Greek dad. He is an amazing man who I am privileged to spend my days with.”

Michele followed that up by stating:

“Chris is honestly one of the smartest and most humble human beings I have ever met. I can’t imagine my life without him and I am truly blessed to spend my days working with him. He has a unique understanding of Kingston, specifically midtown and the ever changing clientele. We are definitely rooted in old Kingston, but are grateful for the current changes and new energy!”

If you’re looking for somewhere to bring the family for breakfast or lunch this month, head on over to see our April Client of the Month. (And be sure to order Chris’ famous freshly carved turkey!)