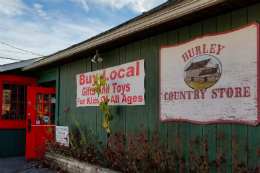 The Hurley Country Store, November’s Client of the Month, has been a Hurley institution since 1992 when Glenn Carlberg saw that the location was for sale and thought the small historic town would benefit from a general store filled with magic and unexpected items rather than another chain store. After opening The Hurley Country Store, Glenn discovered that his great-grandmother had owned a delicatessen in Queens, and his mother showed him a picture taken when he was five years old standing inside a cardboard box store, ready for business—so it’s safe to say that Glenn has always subconsciously dreamed of owning his own little shop, which he now runs with his partner Fran O’Sullivan, their five cats, and dog, Hannah.

The Hurley Country Store boasts a family friendly atmosphere, welcoming visitors from near and far to their old time general store that is filled to the brim with unique gifts for every occasion and season, including candies and chocolates, coffee, tea, assorted bakery items including bagels, hard rolls, and pastries, kitchen items, books, magazines, kids toys, and plenty more!

Additionally, the store is also the leading retailer in the area for model trains and accessories, carrying an extensive line of model trains in Z, N, HO, O, G, and Standard Gauge scales by Lionel, Bachmann, M.T.H., Atlas, Broadway Limited, and others.

Located just around the corner from some of the early Colonial American stone houses in the historic town of Hurley, The Hurley Country Store is open Monday, Tuesday, Thursday, and Friday from 7am to 4pm, and weekends from 7am to 2pm, closed on Wednesdays. The store also has extended hours from Thanksgiving through Christmas.

The Hurley Country Store has been insured by Ryan & Ryan Insurance Brokers since practically its inception in 1992. When asked why they chose R&R as their insurance agency, Glenn responded by stating:

“I met Bob Ryan through a personal contact. It has been a pleasure working with him throughout the years. He has also insured my home and vehicles.”

Glenn closed by stating: “It has been such a pleasure to get to know the people of Hurley and the environs. I’ve made many friendships during the years I have run the Hurley Country Store. As well, I have had the privilege of meeting people from all over the world who come to visit the historic town of Hurley. It’s a great deal of fun to match people up with that unique toy, hobby or gift.”

If you’re looking to experience a true old-fashioned general store with a little bit of everything, head on over to see our November Client of the Month. You can find a list of The Hurley Country Store’s unique gifts and other offerings at www.thehurleycountrystore.com.