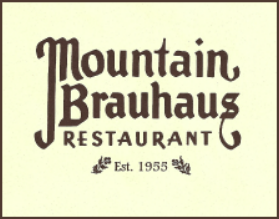 Mountain Brauhaus, October’s Client of the Month, has been a family owned and operated restaurant since it first opened in 1955 in Gardiner, New York. When the family’s Uncle Emil originally decided to set up a restaurant at their current location, it was because he heard that Route 299 would be built, and he thought it would be smart to put a business at the junction. As the family now says, “If he could only see the traffic that comes by these days!”

The restaurant is now currently run by the third generation of the founding family, Mark Ruoff, along with his wife Veronica, and his sister Ilka and her husband, chef Kevin Casey. Each family member brings their own perspective and strengths to the restaurant—with Mark, Veronica, and Ilka handling front-end operations, while Kevin is tasked with keeping the menu exciting and delicious.

Mountain Brauhaus prides themselves on serving authentic German cuisine (think Bavarian pretzels, schnitzels, assorted sausage entrees and more), while also appealing to the contemporary diner by offering vegan specials and dishes prepared with fresh, local ingredients. Because the heartiest meal of the day in Germany is often eaten midday, Mountain Brauhaus has kept with this tradition by serving their full menu of lunch and dinner items both day and night. And the best part? You get to enjoy your meal while overlooking the Hudson Valley’s beautiful Shawangunk Mountains (which are exceptionally stunning during the month of October!).

In addition to a selection of German beers on tap, Mountain Brauhaus has a generous selection of German wines as well. The restaurant is open Wednesday through Saturday, from 11:30am – 9:00pm, Sunday from 11:30am – 8:30am, and closed Monday and Tuesday. While the restaurant doesn’t take reservations for smaller parties, they do offer call-ahead seating, so it is highly recommended that you give them a call up to 90 minutes before you arrive to be added to their waiting list.

Mountain Brauhaus has been insured by Ryan & Ryan Insurance Brokers since 2012. When asked why they chose R&R as their insurance agency, they responded by saying:

“Because of Ryan & Ryan’s excellent service and reputation. Also because we know Jeff Smith, an agent at R&R, who was a classmate of Mark and Ilka’s older brother.”

If you’re looking for somewhere to bring the family this month (and what better time for German food than the month of October!), head on over to see our October Client of the Month. You can find the Mountain Brauhaus menu, additional restaurant history, and more at www.mountainbrauhaus.com.