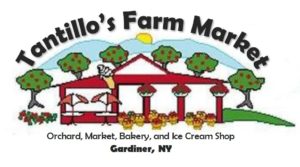 Tantillo’s is open May through November with an assortment of pick your own produce. The Farm, which is owned and operated by Len and Beverly Tantillo, also grows commercial quantities of crops including apples, rye, and corn. The Bakery, Roadside Market, and Ice Cream Shop are owned and operated by Jeannine T. Ridgeway, Len and Beverly’s oldest daughter. Many generations of Tantillos still work there today, including Jessica Ridgeway, who manages the farm’s social media, marketing, and events.

At Tantillo’s Farm Market, depending on the season, you can pick your own cherries, tomatoes, apples, and pumpkins. The Roadside Market sells a delicious selection of baked goods, including pies, apple cider doughnuts, muffins, and breads. You can also purchase homegrown and local produce, jams, jellies, and ice cream cakes, too! 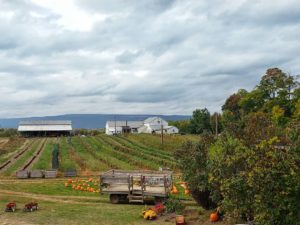 However, if you make the trip to Tantillo’s, the one thing you won’t want to miss out on is their apple cider doughnuts, which have risen to fame in recent years after winning “Best in the Hudson Valley” in 2015. The Farm has also expanded their gardens to grow specialty and heirloom varieties of tomatoes, hot peppers, herbs, and greens. And the ice cream stand is well known for seasonal sundaes, including hot apple crisp, peach melba, and strawberry shortcake, all which use fresh fruit straight from the Farm!

While Tantillo’s baked goods and doughnuts are sold exclusively at the farm market, you may find their jams, pies, and doughnuts at local harvest events and weddings throughout the Hudson Valley. And if you stop to grab a bite at P&G’s in New Paltz, be sure to order the apple crisp—it’s baked fresh and supplied by the Farm! Tantillo’s has also partnered with Tuthilltown Distillery in Gardiner; the Farm grows rye and corn for their award winning whiskey and presses apples for their indigenous apple vodka.

Tantilo’s Farm Market has been insured by Ryan & Ryan Insurance Brokers for more than 20 years. When asked why they chose R&R as their insurance agency, Jeannine Ridgeway responded by stating:

“[Account Executive] Jeff Smith’s father was very involved with farmers and Jeff was local to the area. R&R has been more than accommodating for our questions and needs; they are very professional and trustworthy!”

For more information about Tantillo’s Farm Market, including their hours, visit them on Facebook, and then head to Gardiner to check out our October Client of the Month!